Every October, I get to teach my intensive…..Beginning – Advanced Animal Communication, Death and the Art of Crossing Over and Energy Healing for Animals.  Some people come for one 3 or 4 day module and some people come in for the whole 10 days! 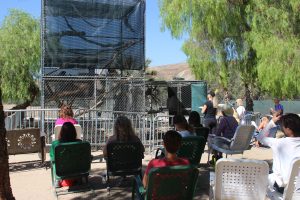 This last October, we had a great group assembled.  For the Beg-Adv. Animal Communication, the Friday and Saturday were the same as they always are, building upon the trust of the animal communication “muscle”, adding in animal medical intuition on Saturday, sharing pictures with each other and having very profound communications.  On the Sunday, we got to do something very special, we got to go to the Gibbon Conservation Center and talk to a family of Gibbons that were having a slight conflict.

When we got there, the place was silent and this particular family was ready to talk.  The Gibbons were carefully sitting by the edge, watching each person as they thoughtfully wrote down the information they were telepathically receiving from this family.

The teenage daughter was in an enclosure next to the family enclosure by herself.  It appears after the baby sister had an injury and was off to heal, upon her reintroduction to the enclosure, they all starting picking on the dad!  I broke the human group into 4 – one group communicated with the mom, another group with the dad, another group with the baby sister and the last group with the teenager.  All of the groups got the same information and what it boiled down to was mom was a little hormonal and it was just easy to blame dad and they all piled on! 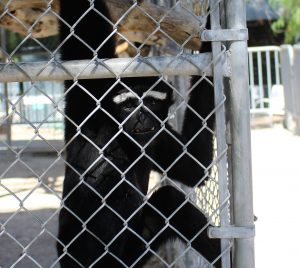 The director of the Gibbon Conservation Center, Gabbi, confirmed all of the information and following the communication, she gave us a tour.  During the tour, as if it wasn’t amazing enough that everyone had a very successful/helpful communication with these magical friends, the gibbons decided to start singing!  It was loud, riveting and each of my students lit up as they felt the power of these love songs reach their heart center!

The Death and the Art of Crossing Over course as always was very intense.  The whole week was full of amazing experiences, communicating with animals that had crossed as well as animals that were close to hospice.  One of those days, we found ourselves down at the Gibbon Center again because a gibbon family had a major illness.  The mother of the big family had cancer and had several young children.  The beauty of animal communication at a time like this can be profound.  All the gibbons in this family were able to share how they were feeling.  It was very big.  And had an impact on the students as they were able to see the importance of allowing all of the family members to share, express, to “talk” it out.

The Energy Healing for Animals course kept us close to home as we worked with animal chakras, energy fields of animals, scalar wave and much, much more!