Joan is an Animal Communicator and author of Communication with all Life, Revelations of an Animal Communicator (Hay House). She is the founder of Communication with all Life University. Through private sessions, workshops, teleseminars and speaking events, Joan facilitates a deepening of the human/animal connection. Joan was chosen by MSN as one of the “Top 25 People Who Do What They Love” and has been featured on Dateline, The Today Show, Good Morning America, and Animal Planet to name a few. Her healing CD, Animal Alchemy Energy Work for Animals and Their Humans, will be out in 2012, along with her newest book, Energy Healing for Animals.

Where are you located?

Tell me about your writing and your book releases….

My first book is Communication with all Life, Revelations of an Animal Communicator, published by Hay House. I should really back up and tell the whole story at this point. When I was seven years old I wrote plays to perform with the neighbors, the proceeds were to go to buying a horse. Thankfully that year I won a horse and the world was spared my bad singing. I always kept a diary, then a journal. I wrote poems, short stories, and plays in college (I was a theatre major). One of my plays was in my college’s Literary Magazine Harbinger; all the other [plays] were produced. I wrote performance pieces in New York City and Los Angeles. I won Critics Choice at the Edinburgh Theatre Fringe Festival for a play that I co-wrote, co-performed and co-produced called “It’s a Man’s, Man’s, Man’s, Man’s World, a Two Woman Show”, with Karen Loftus. I then wrote screenplays and in 1996, when I had an about-face turn of careers, I became an animal communicator. I started writing about my experiences. I knew Hay House would publish my first Animal Communication book and I wrote that on a post-it-note in 1998. They finally found me about six years later and published my first book. My new book will be out in 2012 called Energy Healing for Animals, Techniques to Enhance the Health, Longevity and Wellness of the Animals We Love, published by Sounds True.

I love to write in my office which has a view right into the pasture where my horses are. Across the pasture the ravens have a big nest and are always up to something., and I watch other wildlife float through.

Do you write everyday?

In a perfect world, yes. Sometimes that doesn’t look as romantic as writing great philosophical pieces or poems about the animals. . . . . sometimes writing is reminding a client to keep the hope up in an e-mail or thanking someone for a profound experience. I like to write in my journal if I haven’t carved out time to write or rewrite a current piece. Thankfully when you do write everyday – it isn’t something you have to stop and think about.

How do you maintain ideas and thoughts?

I keep a journal for starters. A lot of ideas get flushed out in that. If I’m driving, I’ll write on a bank statement if I have to something like “forgiveness piece, Michael Vick’s dogs….” And then thankfully, I have an excellent memory for the imagery I created in the daydream. I also have notes in computers for each months newsletter. So I already have next months and the following months newsletter etched out for my clients and readers. Where my memory fails me sometimes is what [file name] I’ve saved my brilliant idea under in the computer!!!!! So I have learned to keep a list of ideas.

What/who is your niche market?

While on the one hand my market is anyone with an animal, I have a couple of niche markets. One is anyone with an animal – I have something helpful to say about creating connection whether you believe in Animal Communication or not. After 16 years of being an Animal Communicator, I have 16 years worth of working with behavior and wellness, so I have a lot to offer anyone with an animal. Anyone with an animal with a challenge is definitely my niche market!! I have a healing background – so people interested in alternative health. I also have had a lot of high level competitors as clients –horses in the Olympics, dogs at Westminster and of course I love helping the kid in 4-H that wants a better connection with their barrel racing partner. I love to get the horse and rider or the dog and handler truly connected on the same page and moving forward as one in competition. And in general – my goal is always household or barnyard harmony!!

Do you have a favorite author(s)? Why?

As an Actress and writer in the theater, I love Chekhov, Gurney, Tennessee Williams, William Inge to name a few. And of animal books – J. Allen Boone – Kinship with all Life (he was a screenwriter and basically an animal communicator of the 1950’s – 1960’s. Machelle Small Wright – Behaving as if the God in All Life Matters – I love this because she had so much trauma in her life and really turned it around for a spiritual relationship with animals. I love books like Seabiscuit, Laura Hillenbrand did an amazing job of recalling the period in history and why the world needed a horse like Seabiscuit. Healing books – my favorite is still Anatomy of the Spirit by Caroline Myss – I was lucky enough to study with her for a few years about 13 years ago. My favorite Spiritual book is Living Buddha, Living Christ by Tich Nhat Hanh. Authors of novels range from the Brontes to Salinger.

What are your writing goals for future endeavors?

I have 2 or 3 books in general I want to write, and two documentaries I want to write and direct. I have some self-published healing CD/workbooks coming out immediately and hopefully a DVD!! I also blog – not regularly enough – partly because I’m currently in a rewrite for the new book.

Do you have suggestions for newbie writers?

Just keep writing, edit later. Get it down on paper, you can always make it pretty later!! Try to write everyday – that way it isn’t something that becomes overwhelming so you just don’t do it. Find a quiet time in the day to connect with yourself and write. Also, if you are a horse or animal person, have some outings each day – sometimes your best material comes on a dog walk or grooming a horse!! 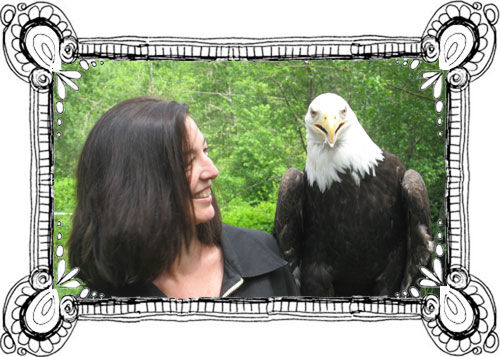 When I first met Joan Ranquet, she had just been cast as the glamorous, exotic leading lady and I, the shorter, more earnest half of…