I have either fantasies or past life flashbacks of being a dolphin. The sound of their exhale as they come up for air thrills my heart and I long to be with them.

Eight years ago, the dolphins initiated my big dream of taking people on animal communication wildlife retreats.  Geoff of Dolphin Expeditions friended me on Facebook and then privately emailed me and the next thing you know we were on the phone and had dates for a trip.

I didn’t know what to expect about swimming with dolphins in the wild.  Except that I knew somehow it would be epic, lifechanging.

Each of the first wild dolphin swim/encounters were off the charts amazing.  We had ground rules, no touching, humans swim together as a pod, etc.  One dolphin kept swimming by, she had a little chunk out of her dorsal fin. (The crew lovingly called her “Sushi”.) 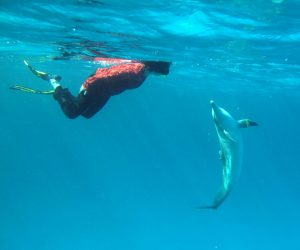 Like every animal that lives in my household, Sushi seemed to have a little impish grin. It felt magical to have her whiz by.  Within a few minutes of her latest drive by, Sushi appeared with a little bit of seaweed in her mouth.  She let it go and then dove to it and had it in her mouth again.  The seaweed piece was on her pectoral fin.  And back and forth the piece of seaweed went from her mouth to floating to her pectoral fin to floating to her mouth and her eyes meanwhile were saying, “yes, I’m asking you to play with me!”

You didn’t have to be an animal communicator to get that message!  While I was in awe of Sushi’s playful spirit she was on to the next idea……….suddenly, she was up close and personal.  I wasn’t afraid, but I was very aware and careful and physically awkward as I didn’t want to do anything to betray this trust.  In this expanded awareness, I noticed that she was swimming around and around and around me, round, round, round and while I didn’t want to break eye contact because it was so intoxicatingly connected, I found myself completely dizzy and disoriented from being spun in so many rotations, so many times.  The next thing you know, in my complete euphoric/ dazed state, Sushi was gone and I was in the middle of a pod of dolphins, as if I were completely one with them.

I think back to that magical experience as my initiation into what I always refer to as dolphlandia! Being a dolphin on land. It is a memory so rich and so deep that there are no words to describe all the feelings that attended that event.

For the next four years, I could send a telepathic message to Sushi or sing the Sushi song (every year a new verse was added) and Sushi would show up on cue. Everyone would be tickled to see this little impish dolphin. And she could disappear just as fast as she arrived.  On occasion she would stay for some more swims/encounters.

I haven’t seen her in the last 3 years.  I like to think she is somewhere maybe playing with the research boat or out initiating other humans that belong in dolphlandia!

Every year as I fly into the little spit of sand known as Bimini, I think I can’t outdo that experience.  Yet, the dolphins never let me down.  I don’t know if it is some kind of familiarity with me because I’m back every year or some core, soul level familiarity but either way, I always felt like I’m let in on some magical moment between them, or being one of 6 humans surrounded by over 60 dolphins (Bottlenose and Atlantic Spotted Dolphin superpod) or having one turn belly up right under me and swim for a while that way – within feet of each other or any number of other profound personal encounters I’ve had. . . . the magic seems to be on a continuum for all the years that I have been down in Bimini.

And for that, I’m eternally grateful! 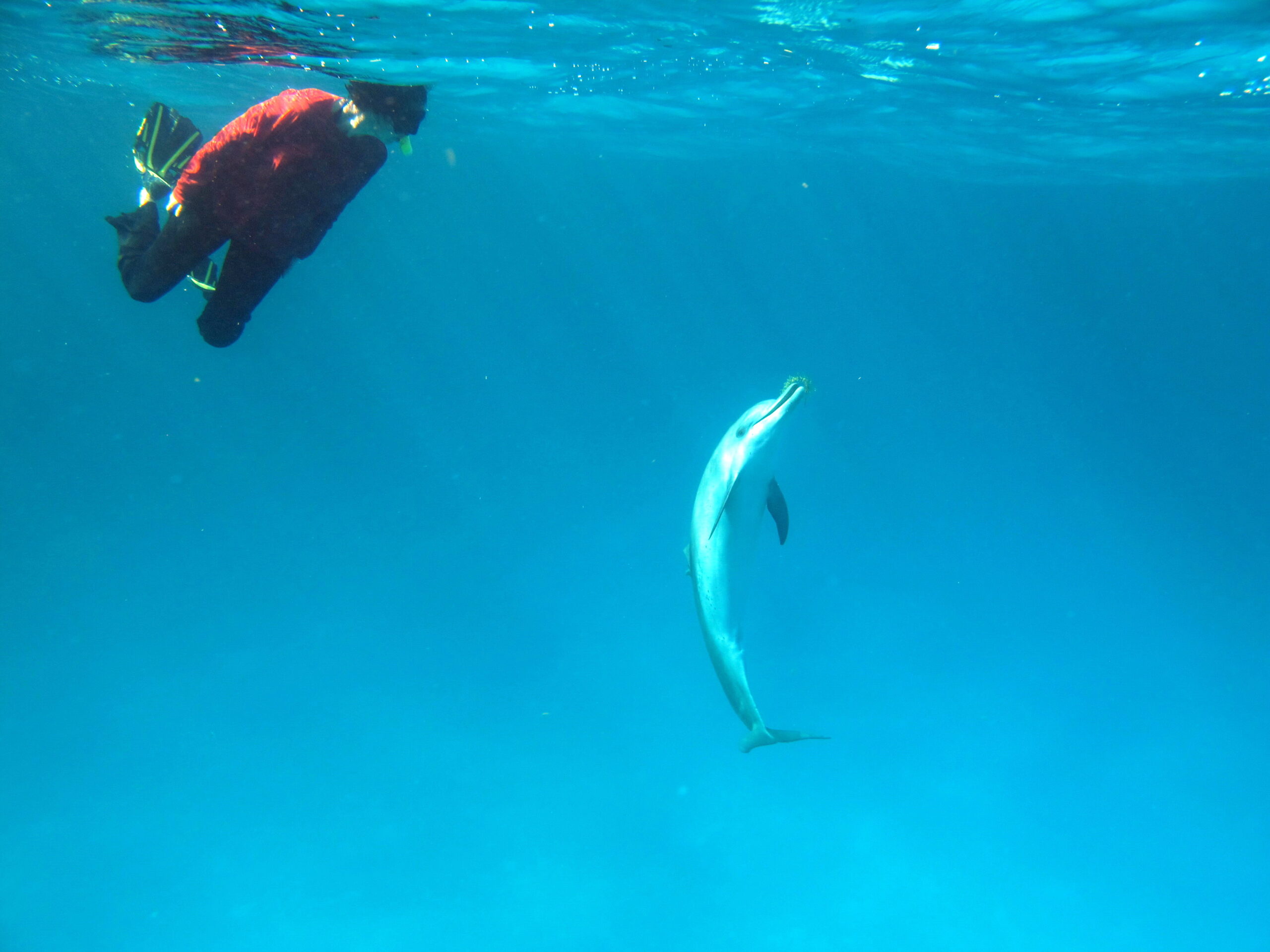 At least once a week since I have been back from the Dolphin trip, I have dolphin dreams.  I’m not normally a dreamer like that…