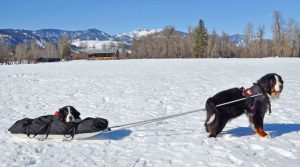 Joan – It was finally time to say goodbye to Winter. We let him go last Saturday, Feb. 26, and I knew it was the right time. We had a great weekend over Presidents Day – a last hurrah of sorts. Here’s the story – photos attached — thanks for all your help over Winter’s life. He had a great one…xoxo

It was a year ago on a snowy February weekend at our mountain house in Mazama that the Winter-boy made his mark by entering the Doggie Dash, a fun ski race for Nordic skiers and their canine companions in costume. Last year 11 year old Winter-boy was using his snazzy red wheels to get around because he could no longer use his rear legs. My husband Chris put skis on Winter’s wheels so Winter could “ski” in the Doggie Dash race as the “Paralympic Pooch”. Winter proudly “skied” across the finish line with 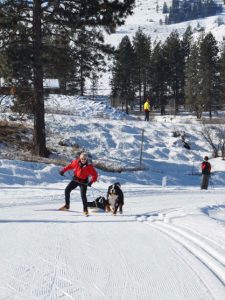 Chris, happy to be out on the snow and be part of the race as he pulled himself along on his skis. This year – as 12 ½ yr. old Winter had lost the strength in his front legs as well and needed a 4wheel rig to get around, I wished that Winter could be in the race once again. We decided it would be too difficult to put skis on Winter’s 4wheel rig – and the 4wheel rig was too heavy to use on the ski trails. If only there was a way Winter could be part of the fun just one last time…

Then I remembered our ski sled – a deluxe sled like the ones pulled by ski patrollers to rescue injured skiers – designed to be pulled by a skier, with a seat for a passenger in the sled. I realized we could put Winter in the sled and he could be “rescued” by the K-9 Ski Patrol! It would be easy to come up with costumes – Chris had a red ski jacket, and Berner boy Tonka had a red search and rescue vest with a cross on it. I added a white cross and “K-9” to the back of Chris’s jacket and Voile! Chris and Tonka became the perfect K-9 Rescue Ski Patrol with Winter as the “rescuee”!

Race day for the Doggie Dash was a beautiful sunny day with just a hint of fresh snow. Chris and Tonka looked very official in their red jackets with the rescue crosses, and Winter was happy to be bundled up in the sled, ready to be “rescued”. There were a lot of dogs dressed in wild outfits, ready to run while their costumed owners skied hard to the finish line – but Winter looked the most regal as he waited for his turn to “race” with Chris and Tonka pulling him. Some people wondered how we trained Winter to ride so quietly in the sled. It never occurred to anyone that Winter was paralyzed as they saw only a handsome Berner calmly riding in the back of the sled – pulled to the finish line as his friends cheered him on. It was easy to see that Winter was loving the attention as people came over to pet him and hear his story. Degenerative myleopathy had robbed him of the use of his legs, but not of his spirit and enjoyment of life. After the race Tonka took a turn pulling Winter around in the sled – just two Berner boys having fun in the snow! It was a great day – just what I wished for – a chance for Winter to be part of the party just as he had been in all the years past. 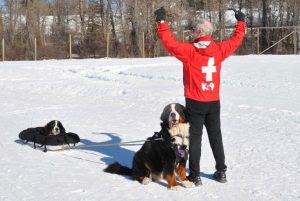 After a long weekend of skiing, playing in the snow with the dogs and spending time friends, we headed back to the city with happy tired dogs. Our drive home was on the epic side as we spent several hours stuck in a snowstorm waiting for the mountain passes to open. Once we were back home I thought Winter seemed unusually tired – his head was down and he didn’t want to eat much, and he wasn’t singing his “woo-woo” song to me. I was sure he would rally just as he always had in the past, but this time I was wrong.

My last wish for Winter was to know when it was time to say goodbye – and that wish, too, was granted. As much as I didn’t want to admit it, the sands in the hourglass had finally trickled out. We had traveled our last journey together.

Winter told me with his eyes and with his silence that we had done everything there was to do – we had packed a whole lot of life into our 12 ½ years together, left no stone unturned – and what a great adventure it was from start to finish. We said goodbye with Winter’s last gift to participate in the DM study.

His body slipped away – no use to him anymore- and his spirit came to rest in my heart where it can stay forever. Somewhere over the Bridge ZenMaster Max was waiting for him and they have gone to play in the snow that never melts, having that final Adventure that never ends. 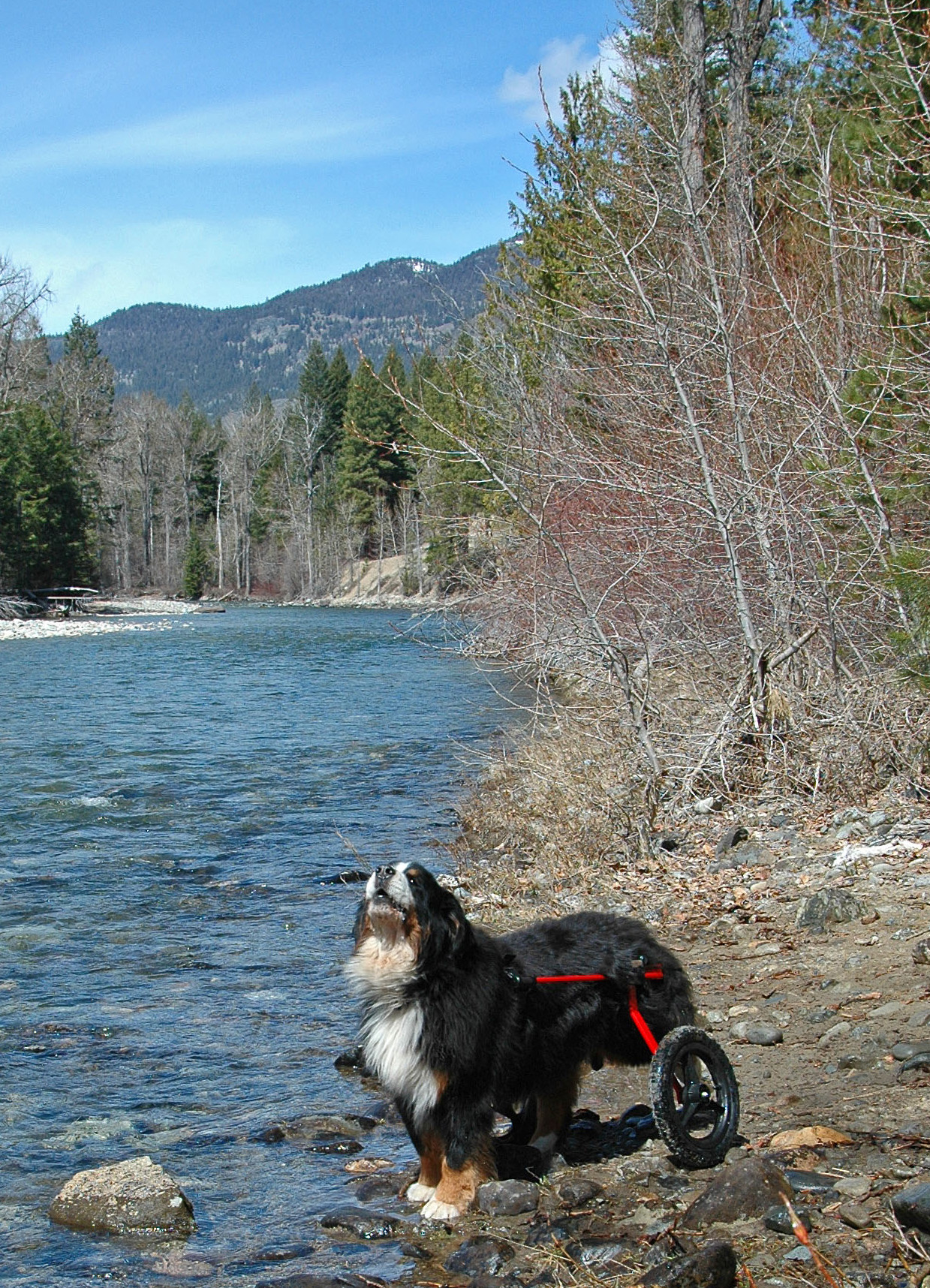