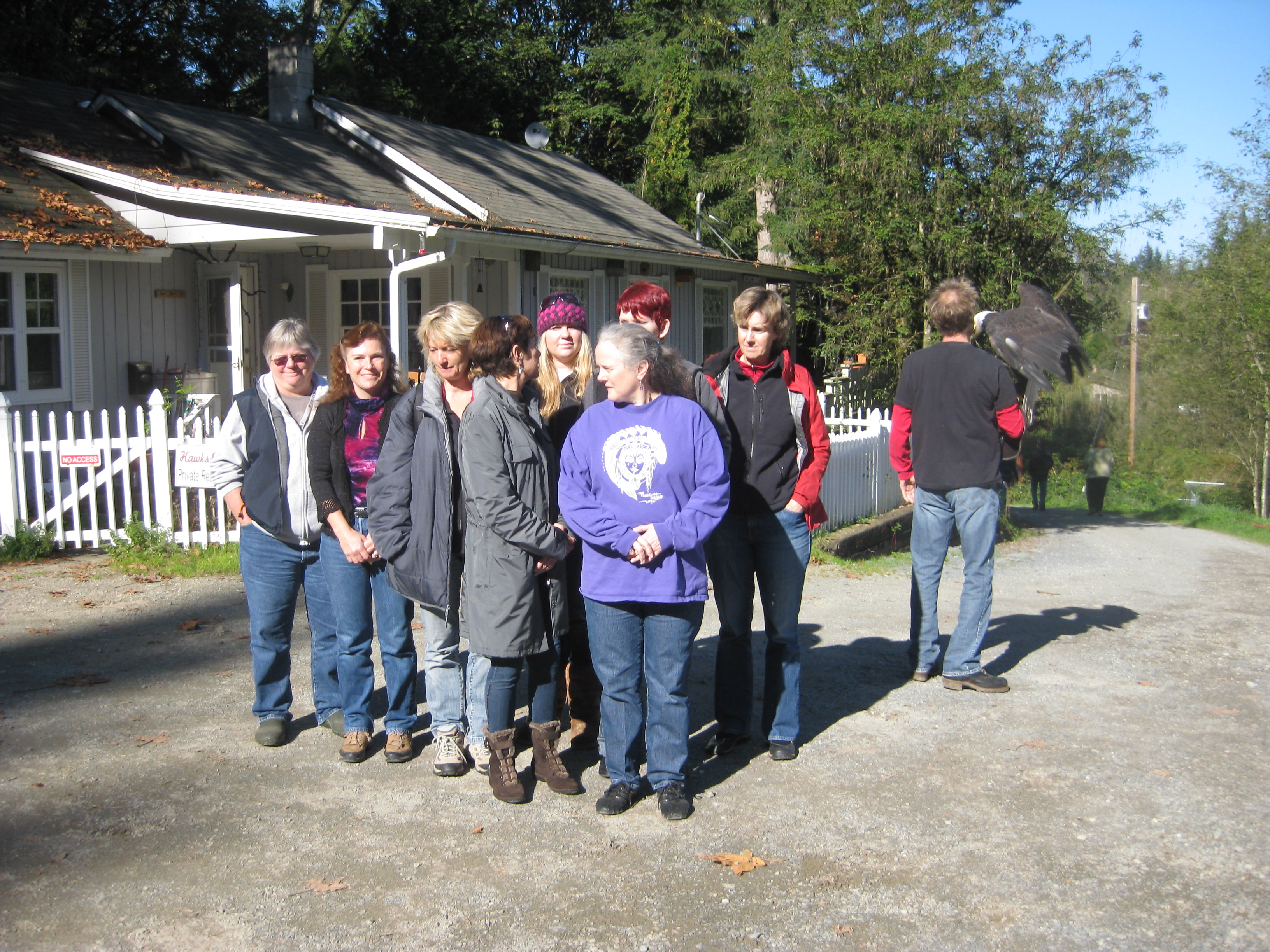 I’m visiting in Florida, about to teach my Animal Communication weekend workshop.  On any of my visits, I create a walk in the morning as my way of settling into that location.  Here outside of Orlando in Osteen, I’m teaching right off the St. John’s river preserve.  On my walk today, I saw a hawk, black birds filling the sky and a family of cranky prehistoric looking long legged birds whose cry rivals a peacock – it turns out they are Sand Hill Cranes.   I also saw turkey vultures, right after that, I heard the gobble of a turkey like someone had a soundtrack on my walk only to turn and find a blue faced busy body turkey.  To top it all off, I saw an eagle.  I frequently wonder in the wild about how big a wild animal’s personality could be……

Last month my Animal Communication class in the Seattle area, was fortunate enough to go to Sarvey Wildlife Center and talk to the famous Eagle Freedom.  Freedom is the subject of Jeff Guidry’s book “An Eagle Named Freedom, My True Story of a Remarkable Friendship”.  (Mini review below.)  We also got to connect with Wanbli Askata – (translation: playful eagle).  As a result of getting to communicate with these two within minutes of each other, I no longer wonder about personality, of any wild animal.

I know now I’m not anthropomorphizing.  Nor am I going to add my humanness to the equation.

One of the students was struck by the fact that these eagles were not able to fly.  She kept putting her sadness on the situation as if humans were purposely keeping these animals there.  I’m not saying this isn’t sad or that at the time of the accident, it wasn’t tragic.  However, after any tragedy, there is a point of accepting the reality in order to move on.

Like any sanctuary, these animals are there because they couldn’t survive in the wild.   Animals in these settings were either injured in the wild or were handled by humans in a truly inappropriate way for their species (i.e. buying cute little tiger babies and then they grow and are big and dangerous and are – oh yeah, huh, that baby tiger is just what you bought – a tiger now.)

The animals that come in with injuries either elegantly become part of the educational system of these programs or their big spirit gets smaller and smaller until their little lights dim and they check out across the rainbow bridge.  Some animals are somewhere in between.  It takes a special spirit in this wild animal kingdom filled with instinct to be part of our education.  Oh are they special creatures!

None of the other students in my program picked up on the sadness of the two eagles we talked to nor did Jeff Guidry talk about the sadness.  He said that Freedom on occasion feels her wild oats so to speak and lifts her wings – knowing she won’t go anywhere.  Freedom actually has become like an Eagle/human ambassador, part of the education program at Sarvey and all over the Pacific Northwest.  You could say she was rather famous even prior to the book coming out.

Her fame is actually greater than showing up at school programs or powwows – not to diminish that significance………..her fame is rather viral if you will.  I met Jeff because for the millionth time, I got that e-mail – you know the one that you’re weeping within 3 lines down…. the e-mail titled “beautiful story about a survivor”.  It tells the story of this broken winged beautiful baby eagle that for 4-6 weeks couldn’t stand and was nearly at the point of being euthanized until a guy named Jeff saved her with his love.  The e-mail goes on to tell the story of Jeff’s cancer and how her love years later saved him.

I had seen this e-mail so many times that I finally googled the guy and discovered not only did he just have a book out – but there was a book signing the following Monday.  I made friends with him on Facebook and it turns out he’s the next town over!  We became real friends ~

Freedom gets a lot of attention.  A lot of doors are open for her and she walks through them with the natural splendor that any diva would.  Her eyes peer right into your soul and you could say that this is the great healing quality that she has.  It is the same intensity that people go to religious or Spiritual beings for healing.  Just to look into those eyes…… she has the power of the greats: a transmission that sees into your being and lifts you.  Any spirit is elevated in her presence.

It comes with a price.  She is very clear like any star that she has had enough.  She is not subtle when she reaches that point.  Jeff is the only one that can “handle” her – all puns included.  My class definitely picked up on her healing and star like quality.  Her elegance was not missed.  Her ability to see into people was quite clear.  When she was done with us, she was done and off she went to her home.

Then, she was a little shy about taking a bath in front of the students, she clearly needed her alone time. 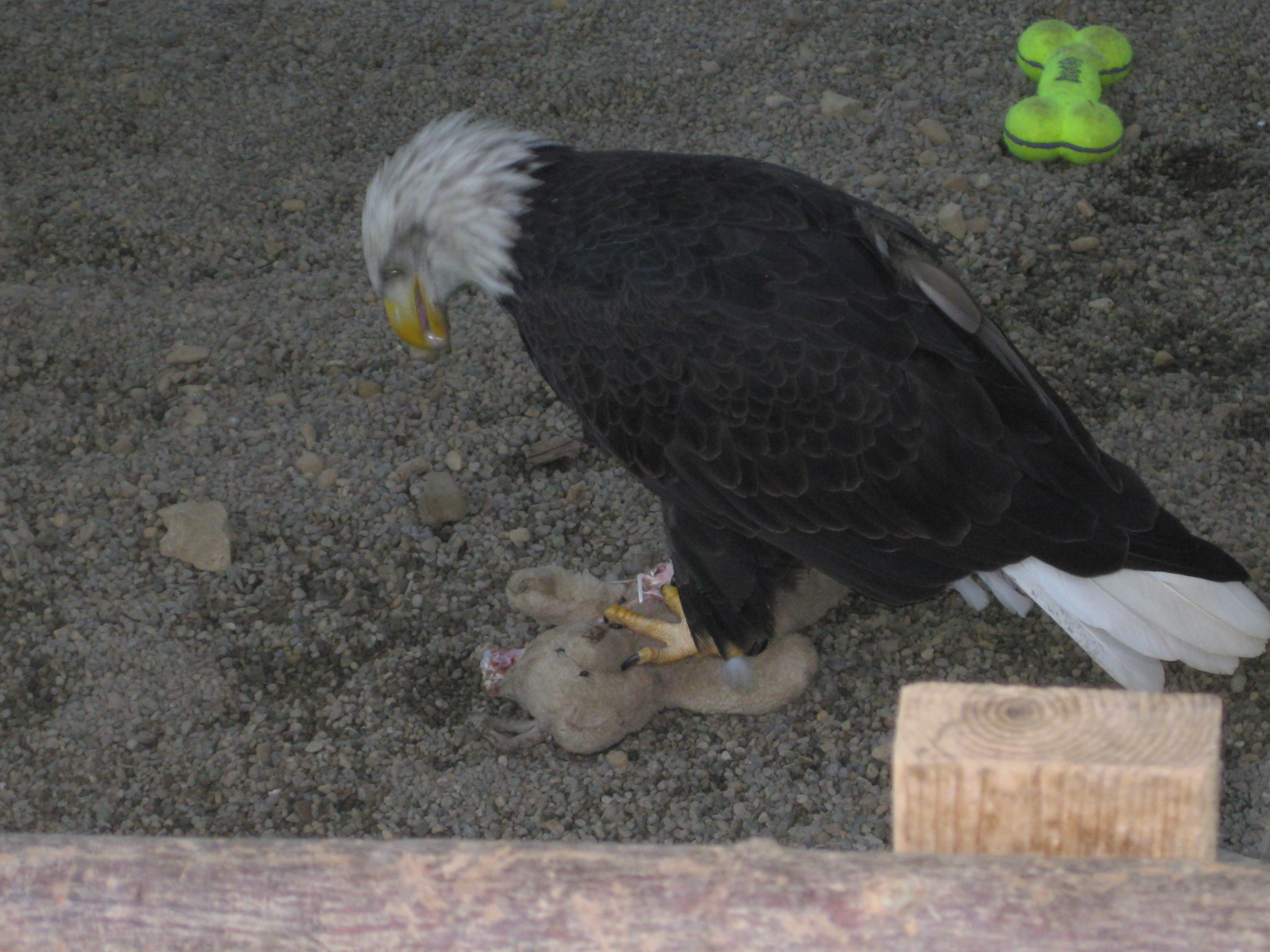 Next the class went on to talk to Wanbli Askata in the adjoining Eagle house.  Wanbli Askata is so the opposite.  She wants the attention for her funniness and her antics.  In fact, Jeff brought her a turkey leg and Wanbli Askata took it over to her teddy bear and did a happy dance on the bear.  I swear she was smiling.  She definitely got her groove so to speak from being next to Freedom.  (Birds of a feather flock together.)  Wanbli Askata learned a lot from Freedom, she learned confidence, and she learned elegance.  She truly had the sense of being the sometimes awkward but cute wacky little sister.

There is nothing shy about Wanbli Askata.  Once she got her sea legs from freedom with people, she became a true comedienne.

So there was the answer to the big burning question that I ponder every day when out in nature.  I have seen very funny squirrels, clever raccoons, bold deer, etc.  These super distinct and big personalities are so fun to experience.  I will blog soon about the big personalities of some big cats I just met…….and soon, after my dolphin trips of course there will be stories!

Meanwhile, places like Sarvey Wildlife Center can use any donation – large or small – please feel free to take a look at this inspiring place:  http://www.sarveywildlife.org/

One of the most amazing things about Sarvey is they have drop off locations throughout King and Snohomish County at various vet hospitals and an ambulance will come pick up the wildlife.  Very cool…….don’t forget also to buy Jeff’s book. 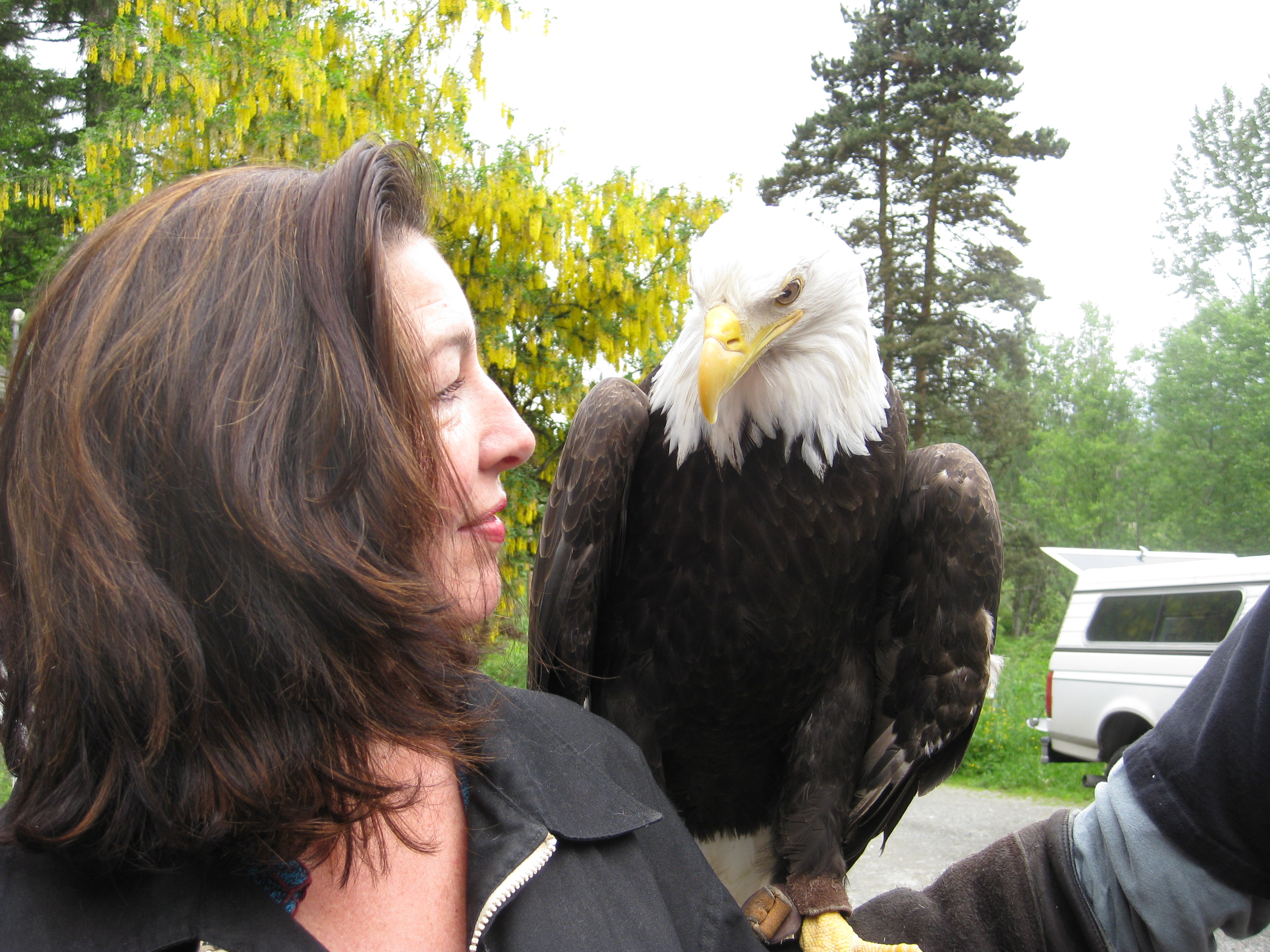 Founder of Communication with all Life University: www.communicationwithallifeu.blogspot.com.

The truly remarkable day I got to meet Freedom last spring! 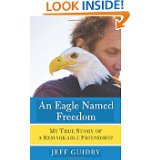 “An Eagle Named Freedom, My True Story of a Remarkable Friendship” by Jeff Guidry is a wonderful book about an amazing relationship.  Jeff Guidry was a volunteer at Sarvey Wildlife Center when a young Eagle that would forever change Jeff’s life was brought in – very injured.  The eagle was responsive to Jeff Guidry but not many others.  His kind voice on the ride to the first hospital visit created the connection for the enduring bond that exists to this day for an Eagle that will never fly and is dependent upon man for her needs, specifically that man – Jeff Guidry.

As the story goes, she was never going to be able to fly again, but whether or not she would survive her injuries and had the will to stand was questioned from the start.  Jeff was smitten from the first car ride and weeks later, she stood thus proving her strong will.  The book goes on to tell of the many wonderful events as they grew closer together, other fun characters both human and other species (cougar, bear, etc.) and ultimately how she saved his life during his battle with cancer years later.  It is a wonderful story of two species in love so to speak – or acting in a loving fashion and the deep connection they share.