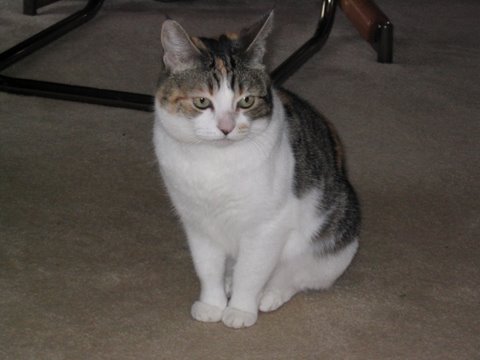 Sadly, Lost Animals are a big part of work as an Animal Communicator.  Some stories don’t end as well.  I wanted to share a story here by my dear friend and healer, Linda Joy.

Joan and I first met many years ago when she came to my house to have a conversation with my new kitten. From that point we became personal friends, and as time went on we became colleagues as well. She now refers her students and clients to me for energy healing (for anyone who knows her, she’s a big advocate of internal energy clearing, emotional as well as physical!); and I refer my clients and friends to her, knowing she will be of great help working with them to heal their pets’ illnesses and undesirable behaviors.

Recently our relationship went full circle as I sought her finely-tuned communication skills to help me find my missing cat, Magic. Magic is an indoor-outdoor kitty and one Sunday I had let her out the front door as I often do. On the days I’d forget to let her back in the front door, she’d climb up the backyard fence and come into the house through the pet door. However, one day about a month ago I noticed around dinner time that she hadn’t come back in. With one of those horrible realizations, I remembered my new fence that was put up and thought she might not be able to climb it. It was now dark outside, dinnertime, and I knew if Magic wasn’t back it was because she wasn’t able to get back for some reason.

I called Joan for intuitive communication help, and she tuned in to Magic right away. Joan said she “saw” Magic trying to climb up a fence. She said she wasn’t far from the house, but was possibly scared, disoriented, and hiding. Joan said because she was likely close by, it would be best to personally contact my neighbors and also ask them if I could check their backyards. The temperature was in the 30’s that evening, and I was half frozen walking door to door on my block. But with predators and freezing temperatures outside, I knew I couldn’t wait until morning. Although even if it had been daylight, because Joan sensed Magic wasn’t far, she stressed that personal contact with the neighbors would be the first step. Having Joan’s intuitive sense that Magic wasn’t too far was really critical information in highlighting what initially needed to be done.

I walked down my very dark block with my flashlight, knocking on doors and meeting neighbors I had never met before (one of the upsides of all of this!), looking in their backyards once I had permission. No Magic. I called Joan when I returned home and she asked if I had checked with the neighbor behind my house. I hadn’t, since I hadn’t thought Magic would even know to travel around the block to get there (she rarely goes far). But I trusted Joan’s inner sight and called the neighbor behind me. Sure enough, he had seen Magic that afternoon trying to get up the fence from his side. But she got spooked by another neighbor’s leaf blower and ran away. So I headed back outside in the dark to go door to door on that block as well. At 9pm I stopped at the last house and met a man named John. I described Magic and mentioned where I lived, checked his yard and headed back home cold and disappointed.

There was nothing more I could do at that point – other than pray, which I did! –  so I headed to the computer. Joan had recommended I look at the website https://missionreunite.org/ for lost pet information and tips. It’s a terrific website with tips on finding pets based on their particular personality, whether they’re indoor/outdoor, etc. The site also offers, for a fee, an actual search in the Seattle area with specially trained dogs. I was exploring their suggestions and making a plan for the next morning when the doorbell rang around 11pm. Standing outside the door was my neighbor John, wearing no coat and holding Magic! He had gone outside to get his cat and in the yard next door he saw not only his cat, but Magic. His cat, or possibly the cold, or both, apparently drew her out of her hiding place. The dear man didn’t want to go get his coat and have Magic disappear so he picked her up and walked over to my house. I was so happy I gave him a huge hug!

I learned some important things from my missing cat episode:  1) contact a skilled animal communicator like Joan who will give vital clues as to where and how to begin the most appropriate kind of search;  2) depending on my pet’s personality and habits, different search methods are used (see https://missionreunite.org/);  3) if I do the hard work that’s necessary up front, there’s greater potential for a happy ending;  4) no matter how much she meows, don’t let Magic out the front door anymore!!