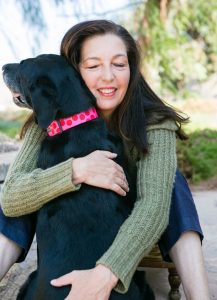 Memorials by nature are an honoring, a tribute, creating intention around a memory and yet, I just didn’t want to make one for Isabella and place it on the wall with Alexandria (cat), Rollie (horse) and Olivia (dog).

Was it because I had so many losses in a short amount of time?  Ah, the challenges of having older animals. Was it because every now and then I feel like I still see her here and feel her around and therefore, she’s not really gone?  Or was it because I just don’t want that finality?

If I’m honest, I think it is all of the above.

I had all the pieces to put together a sweet memorial.  Actually, I’ve had them for a while. As in maybe the 5 months and 11 days she’s been gone (but who’s counting?)  The memorial pieces were neatly tucked away on the buffet. In fact, every so often, cats would knock pieces off. Or I’d have to move it to put food down.  It was just always there, unfinished. 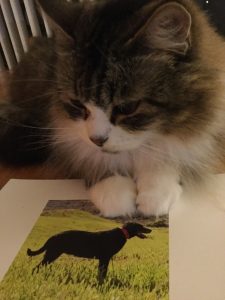 And the pieces are cool.  A heart, she was all heart.  Her pink collar, she was such a girl.  Of course, her dog tags. And then, a remarkable little piece that the person who gave me this couldn’t have known about Isabella.

I had taught Animals in Spirit at the Edgar Cayce’s A.R.E. in March, the weekend before Isabella died.  There I met a young woman who was losing her sight and knew that she wanted to work with animals. She read about Isabella passing in my newsletter and sent me a card…..with “Isabella” in braille.

Isabella died from spleen cancer.   Thankfully, it was fast (she didn’t want anything drawn out).  What many didn’t know is that Isabella suffered from a brain eating parasite and experienced bouts of losing her sight.  In fact, if she hadn’t lost her sight, I don’t know that I would have pieced together all the weird things that went on and keep it all at bay.  The biggest thing (other than periodic blindness) was the anxiety that had no pattern, every six months or so she might shred a door, take down the curtains, eat a throw pillow……..it always seemed random, like every six months.

It was her blindness one night that prompted massive tests.  Once I knew about this parasite, it was a game changer. Many other dogs that have this have sporadic aggression.  Or anxiety. And blindness.

Knowing that parasites are most active on the full moon, I went out of my way to eliminate stress in the household, particularly around the full moon.  When I looked back at any of the events in the past (I do love to look at the patterns of energy) it was always around the full moon or some extremely stressful event in my life.

This discovery through her blindness and my compliance with her need for extreme zen and harmony completely stopped room shredding, pillow eating and many other challenges.  She probably had three episodes at the most in the following 4 years since the diagnosis. 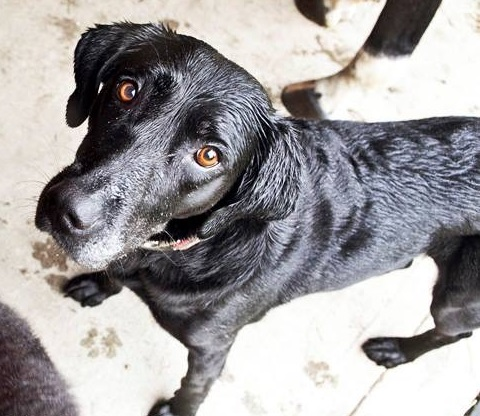 Her story in The Dharma of Dogs, tells about her beginnings that were challenging.  The middle had its moments, too, where I was rendered helpless. Until, she went blind one night.  And as weird as it sounds, the blindness helped me put all the pieces together. We maintained her sight 98.9 % of the time.  And we had WAY less destruction. 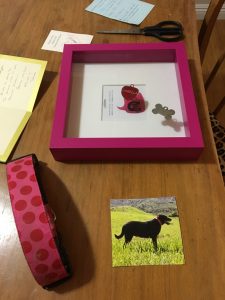 The little pieces I have been keeping together make a beautiful memorial.  A unique memorial. With my upcoming Death and the Art of Crossing Over workshop coming up in October, and it being 9/11, a true memorializing day here in the states, I thought it best to walk my talk and put the pieces of the memorial together.

Trust me, she’s the one that picked out the pink frame. 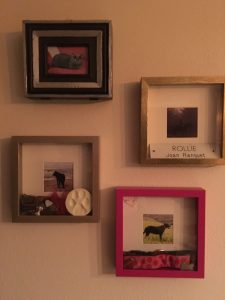 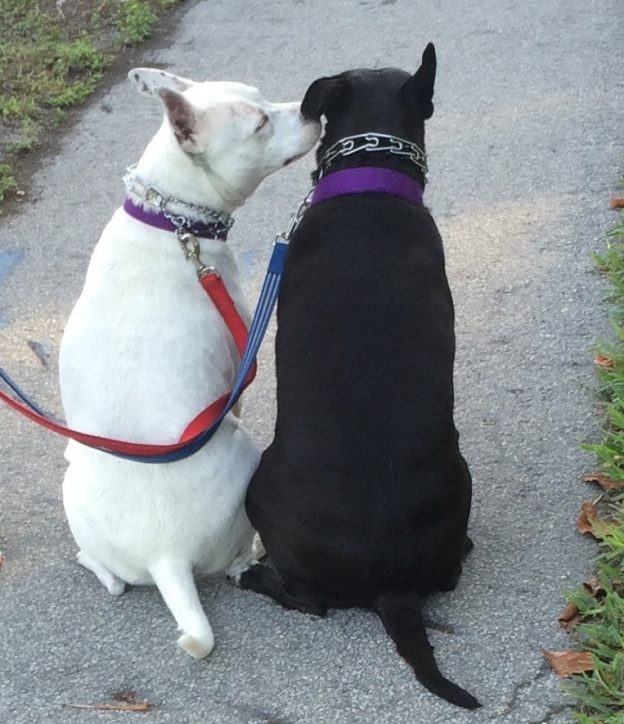 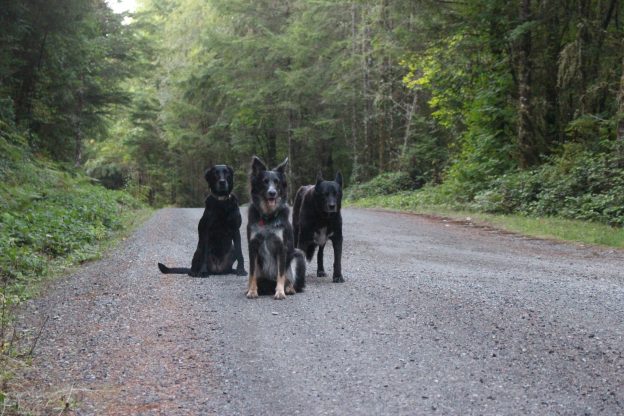