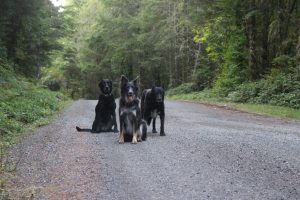 When I came back from South Africa, it was evident something was missing.  Oh, yeah, Olivia.  For those new to me, Olivia crossed in March.  She was 14, 4 months and 9 days (but who’s counting).  She was half Border Collie, ¼ German Shepherd, ¼ Rottweiler and 100% Scorpio.  I often say she was my better half.

On top of it all, I came home from South Africa and it was November.  Olivia’s birthday was November 9th.  Aside from the sadness over not celebrating her birthday, that meant one other big thing, Christmas was around the corner and nobody loved Christmas more than Olivia.  AND, I had the first anniversary of

Rollie’s (horse) death on December 7th, lots of family tragedy anniversaries throughout the month December and no Olivia for Christmas.  I was bracing.  I just didn’t know how this Christmas would even go. 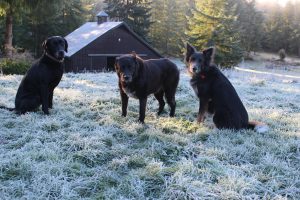 Olivia had been gone 8 months.  People were telling me about puppies, but I wasn’t looking.  In fact, I was resistant.  And yet, there was a hole in the whole program here.  Nobody (cats, dogs or horses) was going to say anything to me about the GIANT elephant in the middle of the room……the pack was off.

Olivia, Isabella and Delilah (my original pack) got along famously.  The “pack” was part of a larger family that included cats and horses and it always felt like family came first and it was part of their duty, mission and purpose. 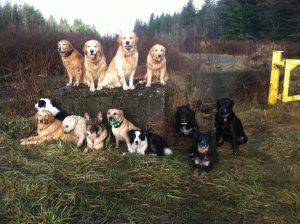 As a small pack, we always roamed, played and at least weekly walked with a giant pack while we were in the Seattle area.  (We are building our walking pack here!)

When you have two dogs, it seems like it is two dogs.  When you have 3 or more, it feels more like a true pack.  As much as I adore Isabella and Delilah together and individually, I miss Olivia deeply.  And I grieved the pack. I also loved the old days of just Olivia and Isabella.  The day I walked back in the door from South Africa, I felt like the pack was missing.  I really recognized the collective “pack”.

As I often have clients find jobs/purpose in the households to maintain harmony, my animal companions each had a role.  I would have said, Olivia was the (self-imposed) manager of all things, Isabella is the heart of the house and the best nanny for dogs, cats and humans and that Delilah was the apprentice to Olivia (and in many ways apprentice to Isabella, as well).

And those are just the dog roles.  The cats and the horses have their part of the family interwoven in this mosaic. 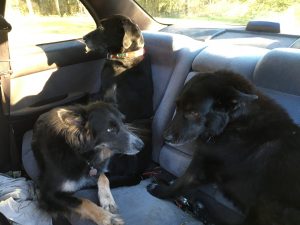 In wolf terms, Olivia was the alpha, Delilah the Beta and Isabella the omega.  The alpha is obvious as to their role.  The Beta is a little more tricky – it can be an “apprentice” type of role and in Delilah’s case, she often exhibited what I refer to as faux submission to both of her older dog sisters, (and to some degree her cat sisters and brothers)  yet, there always felt like a little knowingness  on her part of her leadership.  A beta can fight for that role as an elder weakens.  Delilah was (and still is) respectful.

And of course, Isabella is pure omega.  She is just going with the flow…….unless there is a downwind scent of neighboring garbage and then she is on the run unless she is on a leash!!

I would have thought that once Olivia was gone, Delilah would naturally move on up into her given position, the role of alpha.  I did as much as I thought was humanly possible to create the sense of emotional leadership, holding space to allow Delilah the opportunity to move into her hard earned position.  She had been such a deferential social butterfly, bowing down to Olivia as if to say “I’m not worthy” one minute and then checking in with Isabella on more equal footing, the next minute.

I got a nasty cold upon my return from Africa and was sick for weeks.  In that time (spent on the couch with my dogs and cats), over the course of about a week, a friend was sending me pictures of a puppy she was fostering that was quite compromised after a traumatic experience.  One day there were no pictures and I got a little demanding about seeing more of my puppy.

Somewhere in that silent period, my friend said “how serious are you about this puppy?” I said, I have named her and I’m driving up to Vegas to pick her up after Thanksgiving. 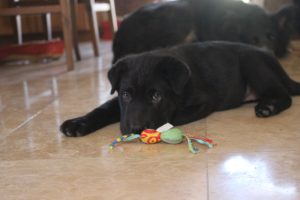 It’s as if Abby had been here all along and we have a pack again.   And this repackaged pack has a familial flavor, that of fun, adventure and compassion for others.

While this repackaged pack feels like a continuum on the one hand, there are different personalities to add to the whole mix.   While there is this perfectly placed soulful, familiar karmic contract of Abby, each of the animals are quite beautifully working out their relationships with each other.

AND, the dynamic of this new pack is very alive.

In our collective grief, it’s as though everyone stayed frozen in time, loyal to their feelings about Olivia and a wish to have things be the way they were. 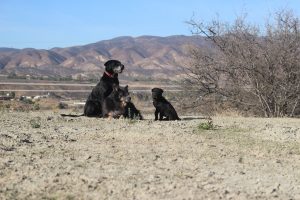 Yet, here we are, in a different state (literally). With a new set of rules.  And a new dogsoul.  Abby brought with her a great sense of adventure and has breathed life into the pack, the household and each of our lives.

And that answers how Christmas will go.  Beautifully!

And we all know Olivia sent her!!!! J 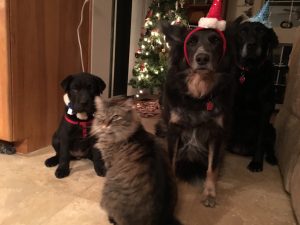