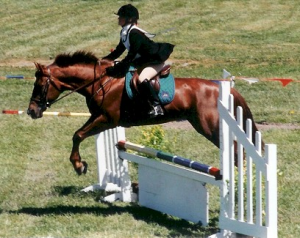 Lupin is well cared for and she knows it. She can’t believe that life can be this good. She knows she was saved three times, and is very grateful for that. She loves jumping, and loves freedom.

She has a colorful past. When she was young, she had her heart broken by a previous owner. She has a history of barrel racing, and the barrel turns were hard on her; hard turns are still not easy for her. She says that she doesn’t feel as bad as they think I do – she’s ok and she’s still feisty. She likes to pretend like she’s seven.

Lupin has taught Erin grace and pizzazz. There were some obstacles in the early times, but after about two yea
rs Erin and Lupin hit their stride. Lupin is a “cute mover” – she likes to show off. And she doesn’t like to quit. They have done all types of riding together. They have done riding in large groups and small groups. She likes going places, even though the trailer is not her favorite place. She gets a little seasick and claustrophobic in trailers; but once she gets there, she’s glad she went.
Frazier is like a puppy. She does like him, but she acts annoyed with him. She would miss him if he wasn’t around.
She tolerates other horses, but doesn’t need to tolerate them at her own home. They do stupid things and are not all that smart. She is above and smarter than most other horses.

She will let you know if something is beyond her abilities. She has a tolerance point, and will not hide it. She is well balanced.

Erin had to learn a lot of things with Lupin. Erin is a leader among her peers, and is looked up to and loved. They’ve done a lot of training together, and overcame a lot of obstacles. They are the best together.

“Porter’s thought was that if built me out of my clothes, that I would emerge out of them :>)!”

Well, I (Jennifer…aka ‘mom’) came home from Canada to the weirdest Porterism to date. Dog = Porter.

I left on Monday and so by Tuesday Porter was desperately seeking mom. When I didn’t show up by dinner time, Tuesday evening, his separation anxiety went into hyper drive and he started to build his own mom!

He started with two shoes. One left, one right. Not matching but both tennis shoes and he found located on the main floor of the house. These he took them upstairs and placed them on MY side of the bed, near the foot of it. Fortunately I left some clean & folded laundry on my cedar chest and from this he found two t-shirts which he added to the bed.

Tom (aka…dad) and the kids were by now teasing him about his “building mom” on the bed.

The next day he found a swimsuit on my dresser and added this to the bed, above the shoes and laid out right side up. Shorts from the laundry were placed on top of the swimsuit, but in a heap, leaving the t-shirts closest to the pillow.

He apparently had to search high and low for some socks, as I had packed most of them for my week long trip. I guess I missed a pair and they had fallen on the floor under the cedar chest and he retrieved these and placed down by the shoes.

Another day, another pair of pants! By now Tom is having a hard time containing himself and calls our daughter and son-in-law to come witness the more complete version of Porter’s “bed mom”.

Porter’s thought was that if built me out of my clothes, that I would emerge out of them :>)!

All I know is that this is one strange dog!!! And one well trained husband that can sleep for a week without messing up one half of the bed!

“A lot of times I’m the last resort for people and the pressure is on.”

One woman called me because her dog, a Doberman was tearing the house apart, separation anxiety and had been aggressive toward certain people….on the phone she said “And if this doesn’t work, I’m putting the dog down.”

I was horrified and not sure what the outcome would be. I went to the house and the dog told me she was so sad. Her original people had let her go (the woman’s brother had to move with his family to Japan) and that since then she had been sent away several times and she didn’t know if she was coming or going.

She felt she had to fight to keep her position there (anybody coming over was viewed as a threat to her position) and that every time the woman left, she wasn’t sure if she was coming back (she worked as a makeup artist and could be gone for long periods of time).

A lot of sadness was released and the woman admitted that she had sent her (from L.A.) to Colorado to a trainer, several times.

Well, the dog didn’t know for how long each time and if she could come back. The woman apologized to the dog, accepting the fact that she (unknowingly) was adding to the insecurity. We discussed other things about how the insecurity was being fed by certain behaviors the woman was doing.

I did some body work and showed the woman things she could do on her own to alleviate the stress and set up a new protocol as far as leaving and what to do when people came over. I left feeling good about it, but couldn’t get too attached, because I didn’t know if the woman would follow through.

A year later the woman called and said “The dog’s been fabulous can you come back over to talk to my cat!”