I have a story here that shows how Animal Communication and other forms of energy healing helped a dog out………even if only for a short time.  Since my new book is called Energy Healing For Animals, I thought I would share a teeny section from it so you can see how it applies to this specific story…….

The easiest way to understand the energetic landscape you and your animals share is to remember that energy can be described as a frequency, a vibration, an electromagnetic energy, and even a current (like the flow of electricity). In this book I’ll use all of these terms describe energy.

Just as everything is energy, everything has a frequency, and all frequencies are broadcast out into the world as wavelengths. A frequency can attract or repel, and the wavelength itself can also contain information.

The other reason I wanted to throw this little tidbit out is because in the survey I did at the beginning of the month, I discovered what you want.  I feel like in order to give you stories and tips with regard to animal communication and energy healing, we need to create a language for this.

When it comes to unconditional love, no amount of time is too short

A couple contacted me in desperation.  They had adopted a dog from the local shelter named Molly and there had been a big fight among their dogs. There had been some injuries, including those suffered by one of the two women.  There were stitches all around.

Before the dog bite, before the chaos, there was an intention to help. Both of the women volunteered at their local shelter.  One of the women, Karen does Energy work and the other woman, Daisha does behavior modification and pack walks.  There was that one dog Molly that they both had been working with.

Molly had been in the shelter for 8 years.  She had known a home once or twice but was returned and wasn’t adopted for years.  She didn’t play well with others, she was known for starting fights.  The last two years she was in isolation and was placed onto the euthanasia list.

Karen said she used to talk to Molly about manifesting her own perfect home and family. Then one day, Karen and Daisha realized Molly was manifesting a home alright, theirs!

They had 3 dogs.  Phoenix a mastiff mix, Skylar a GS mix and Libby.  Libby had been Karen’s dog, Phoenix Daisha’s dog and Skylar they got together.  Their roles and jobs were very etched into their household.

They brought Molly home, she was given her own room.  There were pack walks so they could get to know each other, on leash of course.  One night, a baby gate wasn’t latched and Phoenix slipped into the room.  Before either woman even knew, holy hell broke loose and that is when the injuries were incurred.

So they wanted to have a session.  They sent me pictures of each of the dogs and then this picture of all of them.

In the session, I connected with each of the animals.  When you have a challenge of this nature (or any challenge – health, emotional) you have to look at the whole system of the animal and the whole “system” of the household.  I work with many holistic veterinarians, great trainers, remarkable healers and wonderful body workers around the country to support the whole system.

In many ways, they were doing more than you can imagine.  They were doing lots of behavior modification/training, essential oils for calming and grounding, body work, energy work……there was one giant piece missing…..fun.

They were so earnest in their intention of helping Molly, they forgot that there needed to be fun.  So the household continued to be tense.  And sad.  And hard.

When we adjusted the frequency of the household to fun, everything shifted.  Molly started responding more quickly to the concept of “lighten up”.  She became friends with Libby.  They went into the Christmas season with joking and lightness and pictures and funny hats and laughter and laughter and laughter.

We also gave her the job title of: Ambassador of Peace.

And then this happened: 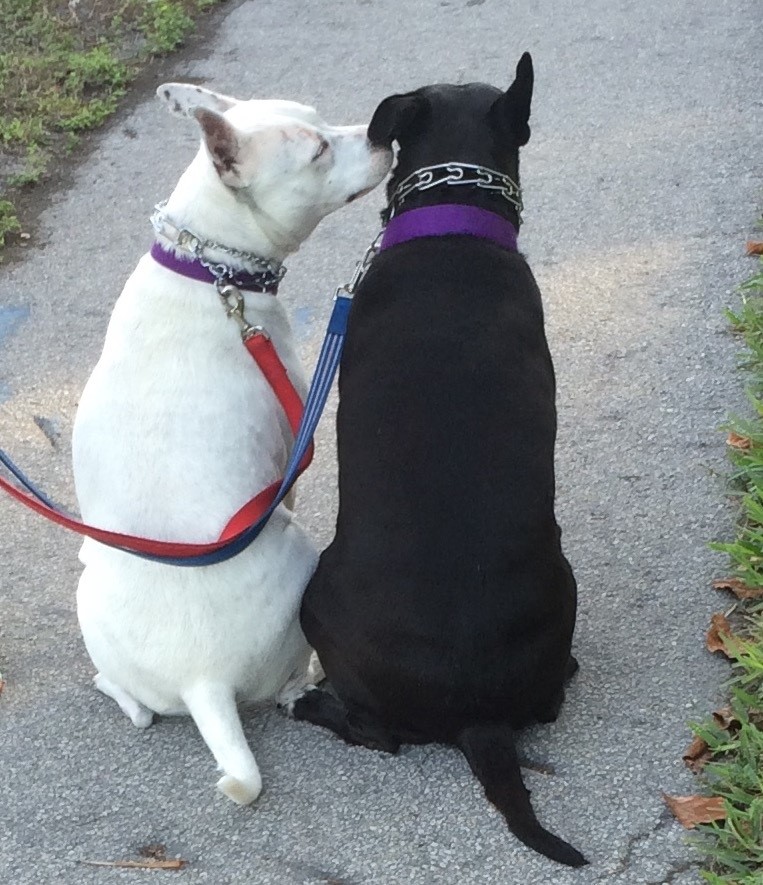 Which is a miracle.

Sadly, there was another door left open and Molly and Phoenix went at it again.  Phoenix, the biggest peace keeper of all, the gentle giant was definitely going to defend himself.  And he did.  And the injuries that Molly sustained were great.  The kindest thing to do with that potential hard road to recovery, if she even would recover was to euthanize her.  In love.

Emotions ground the experience and imprint the world with the event.  If a mother elephant in the wild loses her baby, she grieves and that is a form of keeping record that the soul existed.  How many animals are euthanized in shelters without so much as even a story, a memory, someone grieving over them to keep record?  A frequency with that level of sad moving from this world to the next world would have grounded that beings experience with only potential, nothing fully realized.

While she was only in that home a little over a month, that home gave her wings to the next world, she left with joy and with love.  Molly experienced unconditional love.  She got the only thing she ever wanted before she left planet earth, she got a home.  When it comes to unconditional love, no amount of time is too short.  Molly gets to carry that frequency to the next world.

As tragic as it is for Karen and Daisha, they feel that her job as the ambassador of peace for the unadoptable animals lives on through her story.  They also feel her at work already.