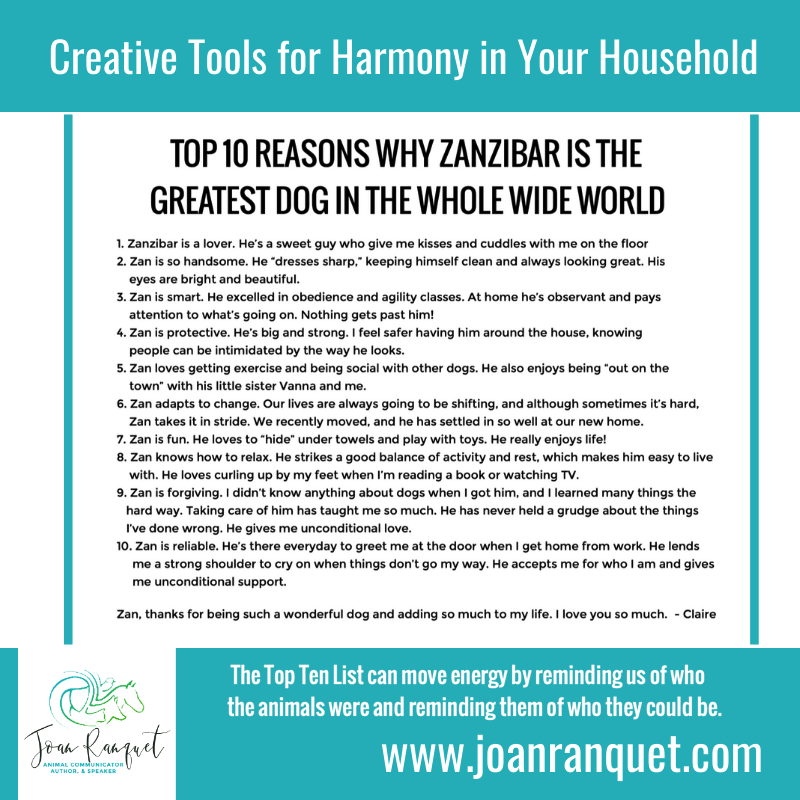 The Top Ten List can move energy faster than anything else. It can remind us of who the animals were at one time to us. It can remind them of who they could be. If the list is hung on a stall door or a refrigerator door or next to the computer at work, it can act like a subliminal messaging service for your mind.

Grey Man was an Arabian in a dressage barn up in Woodinville, Washington. He was gorgeous but not known for his work ethic. I had already talked to about 10 horses at this one barn and this was the last one. It was already nightfall, and it was cold and wet. The woman did not really seem interested in what her horse was saying and was agitated about the whole relationship. I could see that they were clearly locked into a pattern. She finally asked me why he spooked so much. I got quiet and he really poured forth, first with a feeling of sadness and then one of failure. I told her, “Deep down he really meant to be your hero and he has completely failed you. He helped you through a lot in your life and yet you’re always frustrated with him.” Enough said.

Normally, with something as potentially dangerous as spooking, there are a number of measures you would take. Instead I said, “I want you to e-mail me a list. It’s a Top Ten List of all the reasons why Grey Man is a hero.”

She looked at me like I was high on crack. “Grey Man a hero? Ha. He’s anything but a hero; I can’t even walk outside with him without him spooking over his own shadow.”

“Here’s my e-mail address. I look forward to hearing how Grey Man is a hero.”

Six months later I finally got the email from her. She had completed the task. The first few items were rather pedestrian and verged on her just making fun of me for even coming up with this kooky idea. But from about item number six on, we were cooking with gas. One of the last four items on the list was along the lines of, “He was my best friend during my divorce.” The list was fantastic.

Grey Man also had a lameness that was limiting his dressage work and he needed a time out. The woman also informed me in the e-mail that she realized how much she loved him and that she would be putting him out to pasture temporarily until the lameness healed. She would be seeing him less, but she thought he would be happier.

Then about six months after that I got another email. She couldn’t resist hanging out with Grey Man once she had a clearer view of their relationship. She started trail-riding him, which is something she would never have had the courage to do before because of his spooking. Not only was he excellent out on the trails, but if people approached, he’d sidestep toward the bushes and wait until they passed. She said she would hear people saying things like, “What a perfect gentleman.” For a few years after this I continued to hear nothing but heroic tales of Grey Man.

The Top Ten list is great for any circumstance. One woman had given up the horse of her dreams because it was time for him to retire. She got another horse, one that would be like upgrading from a minivan to a sports car. This should have been great. But it wasn’t the same connection. So we did the Top Ten List of how this new horse had gotten into her heart. It sealed their fate of being a loving team.

Another great use for the Top Ten list, which I have recommended time and time again with much success, is when a new animal comes into a household and tries to take the number one position from an existing animal. It’s common for the new animal to come in and say, “Move over, I’m so cute. I’m the new one everyone is paying attention to. I’m the star now.”

The existing number one animal can have any one of a number of reactions. If it doesn’t fight to retain it’s position it might not be overly competitive; it simply doesn’t buy into the new status; or it doesn’t want another animal in the home and so shuts down. This is a great reminder to everyone why that animal is number one. Perhaps the word Pacifist should be somewhere on the list as a reminder to all concerned that going about things peacefully is a noble way to approach the situation.